ReneSola Ltd provides a business update and announces its unaudited second quarter 2017 results.
As announced on September 25, the Company has entered into a definitive share repurchase and subscription agreement (the "SPA") with Mr. Xianshou Li, the Company's Chairman and Chief Executive Officer (the "Buyer") for the sale of the Company's manufacturing (including polysilicon, solar wafer, solar cell and solar module manufacturing) and LED distribution businesses (the "Acquired Businesses"). The transaction will also transfer substantially all of ReneSola's related indebtedness to Li. The transaction will result in:
i) The Company will no longer be liable for the bank borrowings in excess of RMB 3 billion, and the Buyer and his spouse will continue to provide personal guarantees for a majority of such bank's borrowings;
ii) The acquired businesses will cancel approximately $217.3 million of intercompany payables owed to it by the Company; and
iii) The Company will issue 180 million ordinary shares to ReneSola Singapore Pte. Ltd., an entity to be fully owned by the Buyer upon completion.
Mr. Li commented, "This transaction completes the strategic transformation that was initiated in 2015. We will exit the manufacturing business, which has been impaired by overcapacity, pricing pressure and low profitability, and will become a pure play in the rapidly growing and profitable project development market. We believe this is the best path forward for ReneSola. The losses and a weakened balance sheet of the manufacturing business have been significant constraints on the growth of our downstream business. I am very excited to see ReneSola start anew with a stronger balance sheet, a highly capable team and significant growth opportunities. This transaction represents the beginning of a new chapter for ReneSola."
This transaction will significantly improve the Company's balance sheet, providing the financial flexibility necessary to drive the growth of the Company's project development business. The table below summarizes the pro forma changes in the Company's balance sheet, based on the terms of the transaction when it is completed.

The table below outlines the key benefits that ReneSola expects to derive from this transaction. 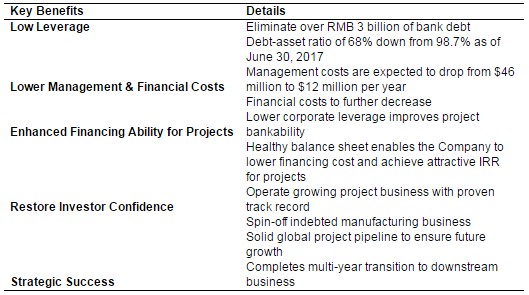 Project Development Strategy
Since entering the project development business, ReneSola has developed over 480MW of projects around the world. These projects range from utility scale to smaller rooftop distributed generation. They share the common traits of operating in stable, mature markets with attractive subsidies. The Company believes that its strong track record in solar project development will enable it to accelerate the development of its project pipeline, as well as attract project financing on favorable terms.
While Build-Transfer continues to be an important strategy for the foreseeable future, ReneSola also intends to retain more projects in selected regions and become an independent power producer ("IPP"). The IPP model is especially attractive, due to the resulting high margin recurring revenue. Over time, the Company intends to shift a meaningful amount of its revenue to recurring power sales.
The Company believes the China rooftop solar market is an especially lucrative opportunity and has aggressively established its presence in that market. Rooftop projects can provide steady cash flow, double-digit IRRs, and reduced risk of curtailment or subsidy delays. ReneSola currently owns over 130MW of rooftop projects under development, concentrated in a handful of eastern provinces of China with attractive development environments. The Company anticipates to own 150MW of China's rooftop projects by the end of 2017.

Mr. Li further commented, "We have demonstrated our ability to successfully build and transfer solar power projects globally. Our project development team consists of 314 dedicated employees around the world. Our strong and capable team, extensive financing relationships and track record of success give us high confidence that we can profitably grow the 'new' ReneSola."
The following table sets forth the Company's late-stage project pipeline by location: 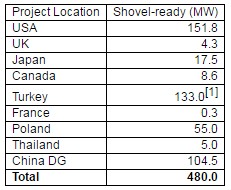 [1] With the start of operation, ReneSola holds 50% of the economics in the projects, which are held for sale and expected to be sold in the normal course upon connection or shortly thereafter.
As of September 10, 2017, the Company had a pipeline of over 1GW of projects in various stages, of which 480MW are projects that are "shovel-ready". The shovel-ready projects include (i) oversea projects that ReneSola has the right to develop or has self-originated in that ReneSola has obtained definitive agreement, and (ii) projects in China that are either owned by ReneSola and have been filed with PRC National Development and Reform Commission, or third-party projects to which the Company has signed definitive agreements for EPC services. The Company has identified a number of opportunities in China's domestic distributed generation market, and had 104.5MW of such projects in the shovel-ready stage as of September 10, 2017.
Outlook
For the third quarter of 2017, the Company's project business is expected to generate revenue in the range of $40 to $45 million and overall gross margin in the range of 15% to 20% with the gross margin of IPP business in the range of 65%-70%. The Company expects to connect 20 to 30MW of projects during the third quarter of 2017.
Second Quarter 2017 Financial Results
The Company today also announced its unaudited financial results for the second quarter of 2017. Because the majority of revenue and losses are related to the Acquired Businesses being sold, the consolidated results are not indicative of the Company's future financial outlook. As such, the Company is only presenting a brief summary for informational purposes.
Second quarter revenue of $151.6 million was down 3.2% sequentially and down 39.4% year-over-year. Net loss was $31.5 million, compared to net loss of $23.2 million in Q1 2017 and net income of $5.5 million in Q2 2016.
The Company recognized revenue of $3.1 million from the sale of rooftop projects of 3.0MW in China's domestic distributed generation market in Q2 2017. The Company also signed an agreement to sell a utility-scale project located in North Carolina with a capacity of approximately 6.75MW with revenue expected to be recognized in Q3 2017. Subsequent to the end of the quarter, the Company signed additional agreements to sell projects overseas, including (i) two ground-mount projects in the United Kingdom with a combined capacity of approximately 10MW; and (ii) a portfolio of ground-mount projects in North Carolina with an aggregate capacity of 24MW. These projects are expected to be connected to the grid by December 2017.
出所: ReneSola Ltd.
この記事で言及した企業のENFプロフィール